Everyone has goals, and it’s a tradition to set them at the beginning of a new year. At the end of the year, we see what we’ve achieved and how wisely we used our time. Now that the new year is almost here and we look back at what we’ve done in 2017, it’s time to sum up this year’s greatest achievements of the humankind.

Great goals take time, and if you’re truly committed, there’s no such thing as “time waste”. Thorough records of time expenses are the most important part of a wise time management strategy, and the final number adds epicness to the achievement. So let’s look at all the greatest things people spent their time on in 2017 – spent, not wasted!

1. 9 hours to scroll down to the end of an Excel sheet

Believe it or not, but Excel sheets do have an end! The problem is, none of us got around to find it – however, admit it, everyone wondered how many rows it has. Thankfully, a blogger Hunter Hobbs went ahead and spent quite a time – 9 hours – to find out that 1) an Excel spreadsheet is not endless, and 2) it has 1,048,576 rows. And note that he did it without using keyboard shortcuts or other cheats, just by holding the down arrow key. What a stamina, and what a discovery! That’s a priceless piece of knowledge that he generously shared with us, and his name should be definitely put in the history books.

2. 7 hours, 29 minutes and 46 seconds to ride the entire Boston subway

How many hours do you normally spend in public transport daily? Even if it’s 2 or 3 hours, bet you hate it! But how about spending the entire workday on riding the subway? As scary as it may sound for an average commuter, that’s what two friends from Boston did. Not out of love for the rush hours, of course: they set a Guinness world record with the fastest time to travel to all Boston subway stations. They rode every line in Boston and visited all 155 stations within 7 hours, 29 minutes and 46 seconds.

3. 10 days queueing to be first to get the new iPhone X

What do you know about being a true fan? Anticipating the new piece of technology and design, patiently waiting for it to be released, and sparing no expense to get a brand new device. Apple fans queuing in front of stores are not surprising anymore, but Mazen Kourouche, a tech blogger from Sydney, spent ten days camping in a tent to be first to get his hands on the flagship iPhone X.

The sad fact is that Apple destroyed his plans by announcing that there will be two handsets, iPhone 8 and iPhone X, and the latter won’t be available for 50 more days. The blogger, who initially told it will be worth the wait, then considered that fifty more days would be too much, but nevertheless, his commitment and effort deserve our sincere admiration!

Breaking world records is not easy, unless you truly love what you do. Like for example Jack McNee, a geek from Australia, who earned the Guinness world record for the longest video game marathon. 36 hours of playing in virtual reality – just think of it!

But McNee could not achieve it alone. To make this unbelievable world record possible, friends and volunteers hand-fed Jack pizza and other food, and the exact recorded time amounted to 36 hours, 2 minutes and 16 seconds, almost without interruptions (just a few quick bathroom breaks). Just look at this happy face! 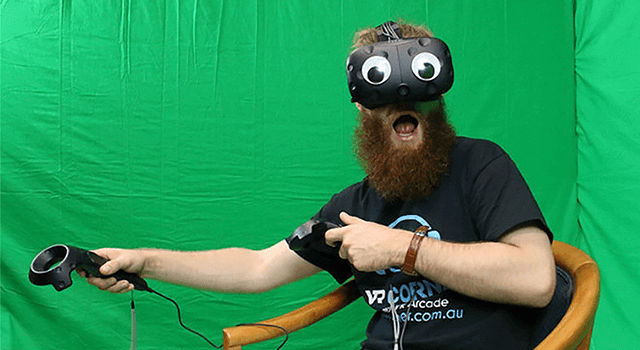 What happens when tradition meets technology? Sometimes amazing things happen, sometimes it goes wrong. An English data specialist, Mark Rittman, just wanted a cup of tea. Normally it wouldn’t take more than 10 minutes (you can check the guidelines on how to make a proper cup of English tea, it’s really easy), but remember, he’s a data specialist! To make things worse, he owns a hi-tech kettle which he used to boil the water over his home Wi-Fi (what a time to be alive!).

Remember Murphy’s law? Anything that can go wrong will go wrong, and that’s what happened to the poor kettle. The base station could not communicate with the water-heating device, and it took Mark 11 hours to debug it and finally make it work. In the meantime, he had to boil water in a saucepan to refresh himself with a cup of tea. Traditional methods never fail – that’s the lesson to learn from this story.

Super Mario Maker allows you to create your own stages. You can make them as difficult as you wish and can, but there’s a catch: you have to beat your own stage before sharing it with other players. This prevents authors from intentionally uploading unbeatable stages to waste other players’ time. And that’s the trap in which Braden Moor got caught: he created a “beatable” stage, but ended up spending over 1500 hours trying to master it, which is equal to 60 days of playing.

The guy called his creation “Trials of Death”, and it turned into the creator’s trial. And guess what – he has not beaten it yet! Some people keep saying it’s never going to happen, but the author won’t give up. He makes videos of his attempts, people keep watching it, and, hopefully, someday everyone will witness the glorious victory and other players will finally try out the Trials of Death.

Virtual reality is a great invention. When you are sick and tired of the surrounding reality, you can use technology to switch off and spend some time in imaginary worlds. Two guys from Brooklyn spent 50 straight hours watching immersive 360-degree movies in VR headsets. The company that sponsored this session wanted to prove that it is possible to spend longer periods in virtual reality. One of the participants is not new to such marathons: in 2016, he broke the record watching TV with the resulting time of 94 hours.

8. 304 hours our team spent on preparing the Game of Thrones timesheet

Yes, we’ve been waiting for the new season 7, just like many fans around the world. And we ended up getting so impatient that we re-watched the entire season 6 with a stopwatch in the hand. Why stopwatch? First, to add a purpose to re-watching. And second, because we were curious what is the bloodshed / crying / negotiating ratio. Then, we structured activities, calculated time spent on them, created timesheets, and prepared nice infographics with cute murderers and villains. It all took quite a while, but we and our readers had fun! 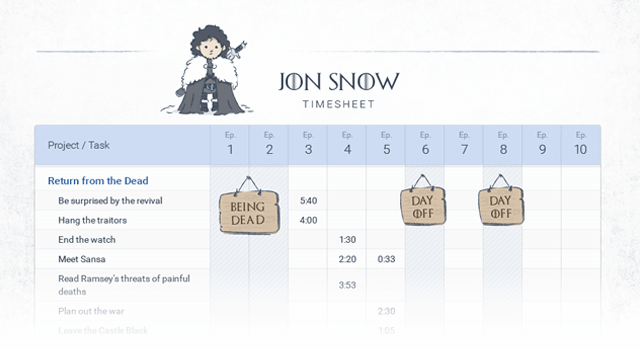 You may say it’s all pointless and ridiculous, but don’t be too judgmental. One man’s time waste is another man’s way to the dearest dream. Everyone has their own vision and sets their goals in accordance with it. And if you’re working hard on your goals (whatever they might be), don’t forget to keep track of time that you spend on it. First, all good time managers know that the progress speeds up when you’re aware of time expenses. Then, it’s a great way to eliminate distractions and focus on what you really want. At least, you’ll become famous on the Internet as a person who spent X hours on achieving an epic goal.

And don’t forget, it’s almost time to think about your goals for the upcoming year! Maybe you could use this collection as an inspiration if you’d like to impress everyone around.